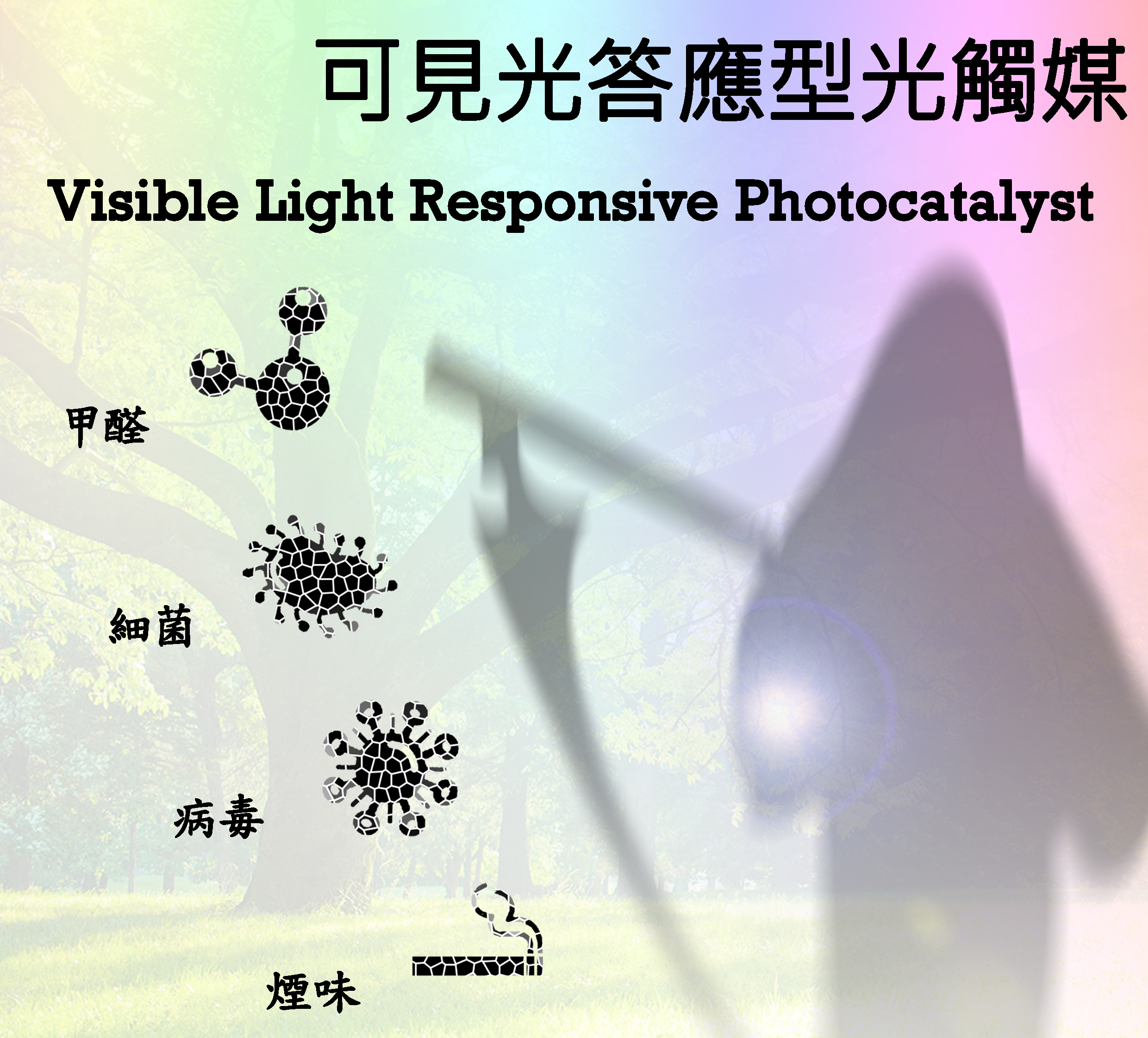 There are more and more environmental problems in recent years. Two of the major ways to remove pollutants in air and water are most common. One is to make use of the cheap absorbents (such as activated carbon). Another is by adopting the Photocatalyst (such as Titanium dioxide). Photocatalysts are widely studied in the field of organic pollutions in air and water. Semiconductor materials possessing the Photocatalyst effect are quite a few, among them are TiO2、WO3、ZnO、Nb2O5、SrTiO3、SnO2、ZrO2、CdS etc. TiO2 is of great interest in air cleaning and water purification as it is nontoxic, chemically stable, of low cost, good optical and electrical characteristics.

Titanium dioxide as a Photocatalyst can eliminate hazardous environmental pollutants but it is only activated by UV light. Titanium dioxides with rutile phase and anatase phase have high energy gap at 3.0 and 3.2 eV respectively. These absorbent wavelengths are in the range of UV which consists of less than 5% energy in solar radiation spectra. Therefore it is necessary to develop modified titanium dioxide to shift the absorbent wavelength to visible spectra in order to capitalize on the major part of the solar energy.

Latest studies have focused on light absorption and catalyst activation in 400nm – 700 nm visible range. Techniques include doping of transition metals, deposition of noble metals, composites with metal like material, rare earth metal, etc. For example, TiO2 doped with W6+、V5+、Pt4+、Ir4+、Rh3+、Au3+、Fe3+、Al3+、Co2+ or Ni2+ etc. may affect the internal crystal structure and properties, and hence move the light activation toward visible wavelength. Successes in having higher catalyst activity have been reported.

Photocatalysis by using Semiconductor Material under the appropriate light exposure will energize the material to become a catalyst, initiating strong oxidation and reduction reactions to adjacent organic pollutants. The series of nonspontaneous reactions can quickly break down pollutants in contact with the semiconductor material. When light of energy higher than the energy gap of Titanium dioxide sheds on titanium dioxide, in which the surface electron can be activated from the valence band to conduction band. This results in the formation of electron-hole pair, which can be viewed as the electrodes of redox reaction. One electrode has oxidation reaction while the other reduction. With the help of Photocatalyst, redox reaction proceeds swiftly. Electron is reductive and electron hole is oxidative. Electron hole reacts with hydroxyl (－OH) on the surface of titanium dioxide to form a highly reactive hydroxyl free radical (‧OH). Electron then reacts with oxygen to form peroxgen free radical (‧O2－). These two extremely active free radicals then disintegrate organic compound into carbon dioxide and water.

Besides, hydroxyl free radical (‧OH) engages in various biological effect to results in damages to cells. This free radical breaks the membrane of bacteria to result in bleeding of cytoplasm, induces the imbalance of oxidation and reduction of the cell, affects its normal function and finally causes its death. Taking TiO2 for example, its redox capability can be activated only by UV light due to the relatively high energy band gap of 3.2 eV. This is why we are to modify it to be able to take on visible light instead.